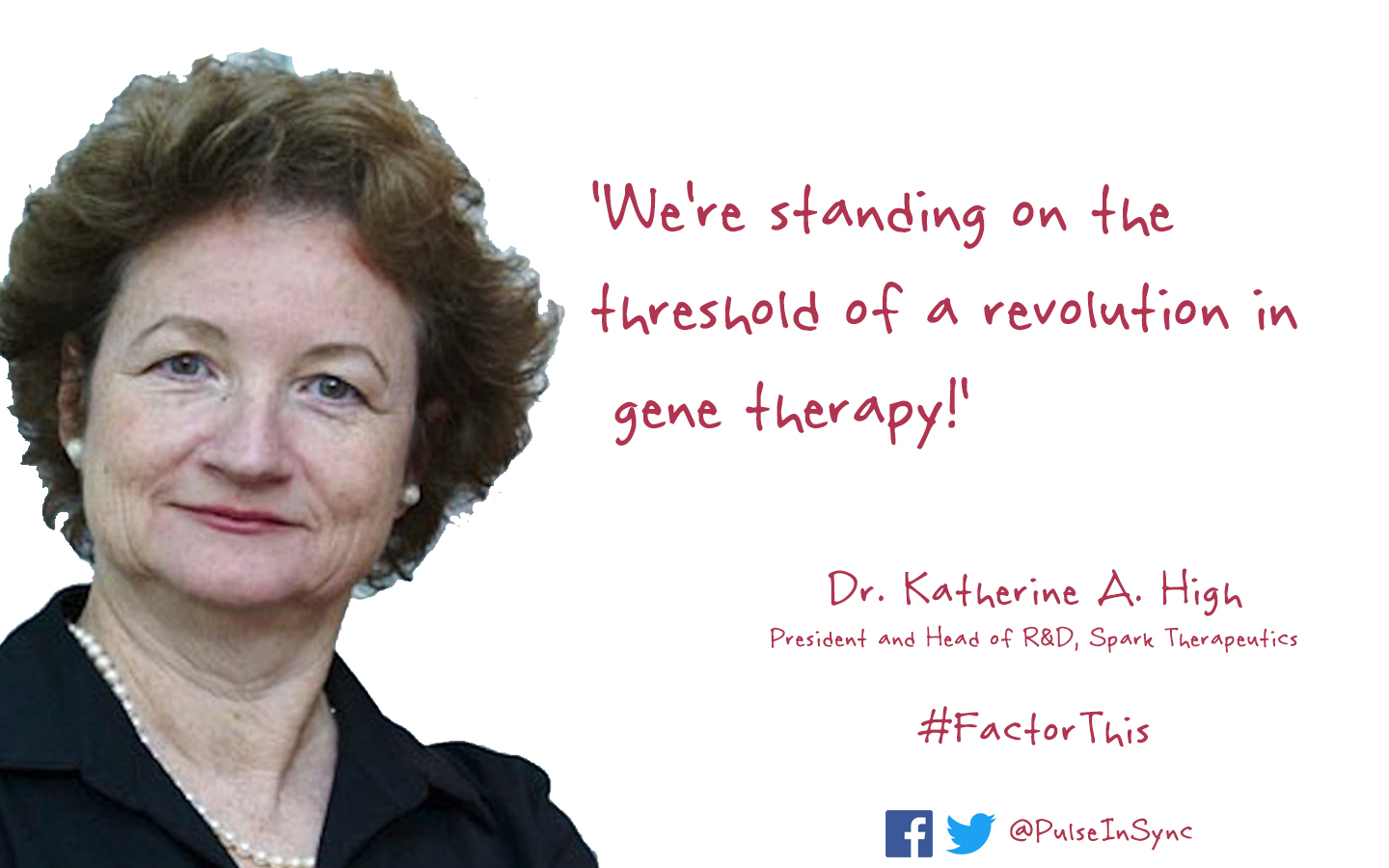 The concept of gene therapy isn’t as new as we might think, having been first mooted in the early ‘70s[i]. At the time, I’m sure my grandad (if he was ever aware of this), would’ve thought it so far out and the stuff of fantasy to ever be possible. After all, he was most probably embarking on his first use of the earliest forms of clotting factor concentrates for his haemophilia, which must have already been transformative having spent most of his life without any treatment at all!

So, I wonder what his reaction might have been then to my short interview with the world-renowned haematologist and gene therapy pioneer, Dr. Katherine A. High?

In light of last year’s media attention around two landmark papers for both haemophilia A and B (see Haemophilia Making Headlines – Now To Stay In Tune!), I was intrigued to hear personally what the senior author of the latter, Dr. High would have to say about gene therapy and the ambition to change the course in haemophilia care.

I was lucky enough to catch Dr. High at this month’s Scientific and Academic Coagulation Consortium (SACC) Conference, where in her capacity as President and Head of Research and Development for Spark Therapeutics, she was presenting a talk on their latest clinical trial data and the clinical path of gene therapy.

Here at On The Pulse, we’re pleased to say Dr. High is the first of our ‘movers and shakers’ in the global haemophilia community, to be featured as part of our new series of interviews spotlighting current developments and hot topics of conversation entitled, Factor This!

1) Please could you tell us about your background and association with haemophilia?

I trained as an adult haematologist and started my career at the University of North Carolina at Chapel Hill in the United States (US) where they have a very large haemophilia clinic. They also had, for many years, a tradition of research in coagulation and set up the first dog colonies with haemophilia[ii]. These were naturally occurring dog models and the haemophilia dog model has been used to develop every haemophilia product that we use today. One of the first things I did in my career was clone the dog factor IX gene, so we could start working on gene therapy for haemophilia B in the dog model.

I was then on the faculty at the University of North Carolina for seven years, before I moved to the University of Pennsylvania, becoming a faculty member there for a further 22 years. I subsequently took a leave of absence to work at Spark Therapeutics, which had been spun out of our gene therapy unit at the Children’s Hospital of Philadelphia. My plan was to return to the University after two years but I ended up resigning to stay at Spark.

2) How would you explain gene therapy to someone affected by haemophilia compared to the use of replacement clotting factor?

If you treat with a standard clotting factor, it may last for 12 hours or should it be an extended half-life product, maybe for 24 hours. But it has to be given over and over again. The beauty of gene therapy is that if you give the gene, it lasts for a very long time.

3) What are the prospects of gene therapy becoming a genuine therapeutic option in haemophilia?

I think it looks very good right now for adults as all of the haemophilia trials at this point are focussing on this cohort.

In December 2017, the first AAV (adeno-associated virus)[iii] product was licensed in the US from Spark for a rare form of congenital blindness and we’re now trying to get it licensed in Europe, so I think there’s definitely a regulatory pathway for AAV products. I think this is very encouraging.

The regulators will want more safety data before paediatric haemophilia patients will be candidates. I expect adolescents will probably follow not long after adults but for younger children, I think they will be a little further down the line. I’m very encouraged to think that we can adopt gene therapy approaches for inhibitor patients, too. This won’t be right away but hopefully sooner rather than later.

Overall, I believe that gene therapy can really change treatment options for people living with haemophilia.

4) Where are Spark currently with their gene therapy trials for haemophilia A and B?

Our haemophilia B programme was partnered from the beginning with Pfizer. The arrangement was that we would complete the Phase 1/2 studies and then Pfizer would take over at Phase 3. Therefore, we anticipate later this year to be transitioning the programme to Pfizer. Of course, they already have a recombinant clotting factor product for haemophilia B licensed in over 60 countries, so I think Pfizer have the wherewithal to do very extensive development.

For haemophilia A, we’ve kept that programme ourselves at Spark and we’re very encouraged by the results that we’re getting. We expect to keep moving through the Phase 1/2 studies, with a view towards providing another update on our data later in 2018.

5) What do you think might be the potential barriers to gene therapy for haemophilia being adopted into clinical practice?

My own sense is that haemophilia, in some ways will be more straightforward than something like a rare form of congenital blindness. Right now, congenital blindness does not really have a cost to the healthcare payer system because there are no other treatment options available. Yet for haemophilia, you have a situation where any new treatment that is developed is likely to offset very considerable costs that already exist. For this reason, I don’t think I would envision price as a barrier to access of gene therapy for haemophilia.

As with any new class of therapeutics, there will be early adopters but there will also be those who will remain on the treatment they’ve used for a long period of time until they see more safety data. To me, I think that’s fine… the goal of all drug development should be to give people options in how they manage their disease. Some people will keep using replacement clotting factor, some will use the non-traditional pathway drugs[iv] and others will use gene therapy. I think that’s a good thing!

6) What, in your opinion, are some of the most important issues in the haemophilia community we need to address?

We can now all see a time when haemophilia management may be much easier than it is at present. But I think that, for example, with paediatric patients it will be the case now as it has always been; that optimal management during the paediatric years will allow people to live fulfilling lives. If management eventually does become much easier, you would want to make sure they didn’t get bad joint disease when they were children.

Then there’s the importance of access for all – the World Federation of Hemophilia’s motto. I really do hope the availability of gene therapy will change the landscape for resource-constrained nations where treatment is not as available as it is in the western world.

7) On this note, would you say this forms part of your vision for the future of haemophilia care?

Well, wouldn’t it be great to actually have a situation where it was straightforward to treat all genetic diseases?

Part of the hope of the human genome project had been that, once we had identified all these genes that we would be able to turn genes into medicines and really expand treatment options for people born with genetic diseases. It’s proven, however, to be much more complex than people had originally hoped. But I think we’re standing on the threshold of seeing a revolution in treatment with gene therapy.

In fact, when our AAV product for congenital blindness was licensed, the FDA (Food and Drug Administration) held a press conference and their commissioner Scott Gottlieb, M.D. said, “I believe gene therapy will become a mainstay in treating, and maybe curing, many of our most devastating and intractable illnesses.” There are publications that describe clinical trial results that, to me, I expect will certainly be licensed also, such as an AAV gene therapy for spinal muscular atrophy.

The haemophilia results are very encouraging, so I think we will see more gene therapy drugs coming through, which is very exciting!

The team and I would like to extend our immense gratitude to Dr. High for giving up her time during a very busy conference and sharing her perspectives and expertise with us. Please note, On The Pulse has no affiliation with Spark Therapeutics or Pfizer and by publishing this, it does not imply any endorsement on our part of their products or services.

If you have any questions or comments for Dr. High or ourselves, please get in touch via Facebook, Twitter or by email at info@onthepulseconsultancy.com.

[i] For a comprehensive and timely review of gene therapy, read Gene therapy comes of age (2018) co-authored by Dr. High, published in the Jan. 12 issue of the journal Science.

[ii] To learn more about the history of dogs in clinical research for haemophilia, check out Emily Sohn’s (follow on Twitter @tidepoolsinc) awesome piece for Scientific American and featuring Dr. High, entitled, In the Fight against Haemophilia, Dogs are a Weapon (2015).

[iii] The use of viral vectors to deliver a therapeutic gene is the most common approach currently in commercial development and of the different viral vectors available, AAV is most commonly used. If you want to understand more about this technique, we recommend watching this animated video developed by University of Florida Health called, What is AAV and how does it work? (2015).

[iv] For a rundown of novel treatment approaches in haemophilia, take a look at this interview with Steven Pipe, M.D. filmed at last year’s International Society on Thrombosis and Haemostasis (ISTH) Congress in Berlin, Germany – Novel Therapies for Hemophilia – Small Molecules in the treatment of Hemophilia (2017).