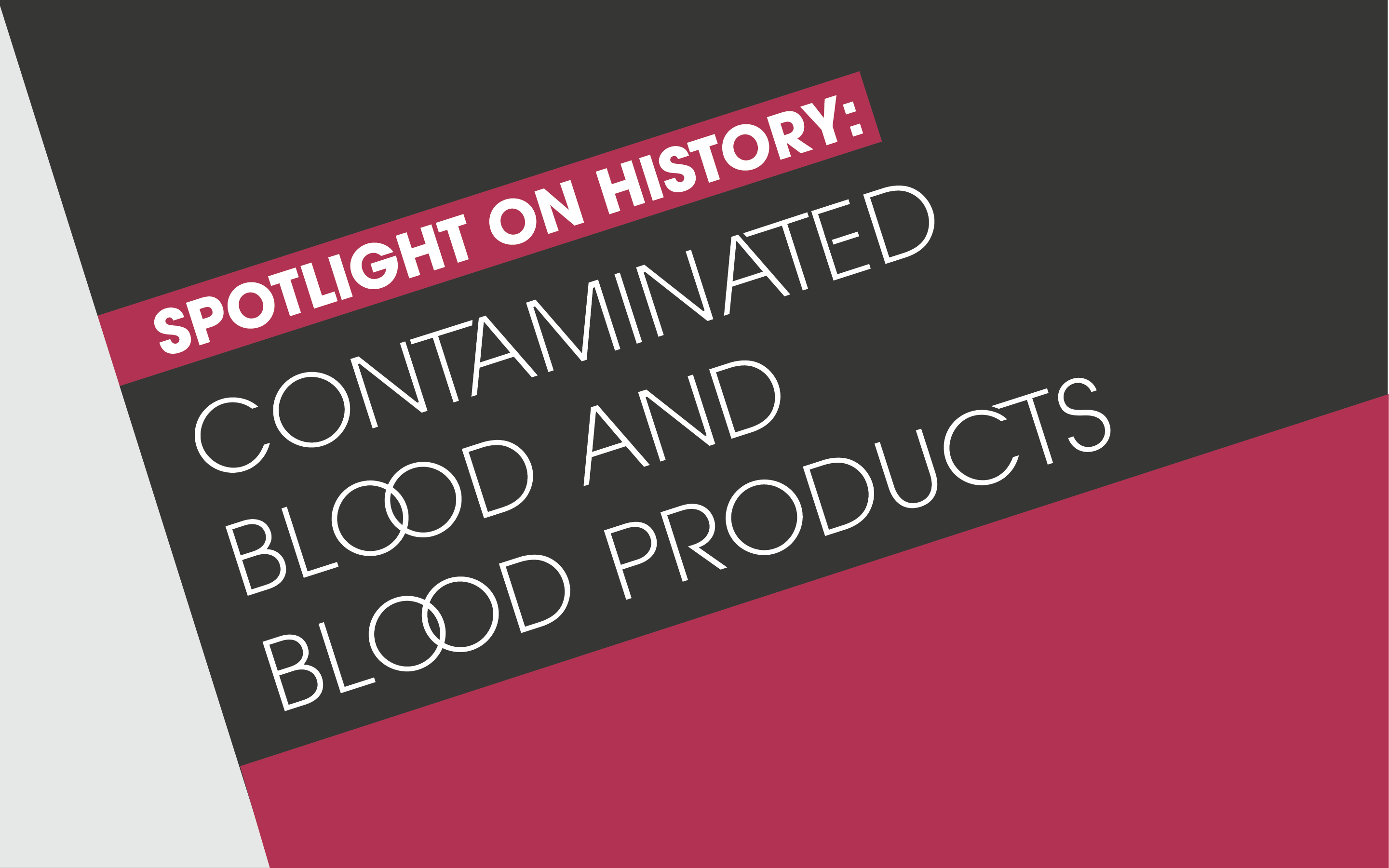 The Infected Blood Inquiry, chaired by Sir Brian Langstaff, is due to begin its public hearings in London on Tuesday 30 April 2019.

The inquiry is examining the circumstances in which men, women and children were given contaminated blood and contaminated blood products in the UK, in particular since 1970. As of next week, people infected and affected shall give oral evidence to this inquiry for the first time.

If you followed our Factor This! blog series last year, you will have heard about the enduring legacy contaminated blood has made on some of our contributors’ lives.

For those maybe unfamiliar with the contaminated blood tragedy, we wanted to provide some context using the available literature, with particular attention given here to the haemophilia community. This includes a brief reflection on past investigations relating to this devastating episode, considered as one of the biggest treatment disasters in the history of the UK’s National Health Service (NHS).

A brief overview of contaminated blood

The modern management of haemophilia began in the 1970s with the commercial production of lyophilized – or freeze-dried – plasma clotting factor concentrates.1

These products, prepared from pooled donations of plasma, made the delivery of treatment possible at home and the early control of bleeds feasible. Treatment ‘at the doorstep’ was deemed a gigantic step forward in haemophilia care.2

Within the UK, the first commercially prepared concentrates for haemophilia A (clotting factor (F)VIII deficiency) were licensed by the Department of Health and Social Security in November 1973. By 1975, home treatment programmes were being run by several haemophilia centres. An estimated 55% of the blood product was imported with the rest sourced by the NHS.3

However, since these pools of plasma contained up to 30,000 human donations,4 the manufactured concentrates were invariably contaminated with blood‐borne viruses.5

The high incidence of hepatitis after treatment with large pool clotting factor concentrates was first reported in 1972.6 But it was tolerated as a seemingly small price to pay for effective therapy.7 Yet, there was an initial gross underestimate of its prevalence because most cases of acute and chronic ‘non-A, non-B’ hepatitis – later identified as the hepatitis C virus (HCV) – were asymptomatic.6

People with haemophilia treated before 1986 and the early introduction of virus inactivation procedures, experienced a near-100% risk of infection with HCV.8 Some 4,670 people living with haemophilia became infected with HCV in the UK.9

The true impact of viral transmission through clotting factor concentrates was not appreciated until the magnitude and consequences of the human immunodeficiency virus (HIV) epidemic. This became evident in the haemophilia population by the mid-1980s.7

The probability of acquiring HIV correlated with the severity of the condition. Individuals with severe haemophilia experienced more frequent bleeding episodes, thus required more treatment, either on-demand or prophylactically two or three times per week.10 In Europe and in the USA, 60-80% of persons with severe haemophilia became infected with HIV through contaminated concentrates.5

In terms of the UK, about a fifth of the community contracted HIV between 1979 and 1985.11 Of those alive on 01 January 1985, 952 (53%) individuals living with severe haemophilia were infected with HIV as well as 294 (7%) with moderate and mild clotting factor levels.12 Coinfection of HCV and HIV contributed to mortality rates.11 To add, the recognition of the potential risk of sexual transmission of HIV was a major source of anxiety for people with haemophilia and their partners.13

It is a tragic irony that the same plasma derivatives which brought independence and life-saving therapy to thousands also devastated a generation of people with haemophilia and their families.8

Since 1987, no new cases of HIV infection and after 1993, when also the anti-HCV screening of blood donors became mandatory, no new cases of hepatitis have been observed worldwide from the use of virally inactivated blood products among the haemophilia population.15

The situation in Ireland

By the 1980s, approximately 250 of the entire Irish haemophilia population of around 400 had contracted hepatitis through contaminated products, over 100 were HIV positive and AIDS had eclipsed bleeding as the leading cause of death.16

Not one but two public inquiries were established in the aftermath of the blood crisis in Ireland. The first was the Finlay Tribunal in 1997, which examined the events surrounding the infection of over a thousand Rh-negative women with HCV through the use of a domestically produced contaminated blood product; Anti-D.17

The tribunal’s remit did not attempt to address issues of significant concern to the Irish haemophilia community. As such, the Irish Haemophilia Society (IHS) continued to lobby for a tribunal that would explain how and why its members had been infected.17 The result of this lobbying was the establishment of the Lindsay Tribunal, which began hearings in May 2000.18

It was found that the source of these infections had mainly (though not in all cases) come from commercial products, which had been purchased from American pharmaceutical companies by the Blood Transfusion Service Board (BTSB) in Ireland (now the Irish Blood Transfusion Service). It was determined that the BTSB did not react quickly enough to the threats of HCV and HIV.19

In 2002, the inquiry concluded that regulatory officials had delayed adopting procedures such as surrogate laboratory testing and use of heat-treated blood products; had postponed development of a self-sufficient blood supply; and had maintained poor informed consent procedures during the 1980s.20

Brian O’Mahony, Chairman of the IHS then and Chief Executive now, played a key role in advocating for justice. He shared with us the mood and expectations of the time:

“We had a strong, united community in Ireland with one message – our members wanted answers! They also wanted accountability, both individual and institutional, and entitlement for their losses. Some of them sought additional compensation, too.

Importantly, people got to tell their personal stories. We had responsible media coverage, which really led the general public across Ireland to understand what happened. Ultimately, this brought about an outpouring of sympathy and empathy for the community that was so deserving.”

The Irish government approved an unprecedented compensation package for people with haemophilia infected by contaminated blood products, including a provision for the families of the deceased to claim damages.21

The Minister for Health at the time, Micheál Martin, made a commitment to future product safety and efficacy,18 and was quoted as saying, “If any group of patients in our society is entitled to be treated with the best products on the market, it is surely the haemophilia population.”22

In line with the recommendations in the report, Micheál Martin also agreed that a National Haemophilia Council (NHC) should be set up as a statutory body. A separate body was set up to select, monitor and procure future treatments for people with haemophilia and other inherited bleeding disorders. Crucially, the Society has a formal role and strong representation on both entities.22

“We put a lot of work into our submission into the future outlook of haemophilia care and blood product safety more broadly. Although, at the time, we felt the inquiry’s recommendations were rather too general and vague, it would prove to be a huge advantage as we could add context on our own accord. We ended up designing our own community’s future!”

Searching for answers in the UK

An independent inquiry, led by Lord Archer of Sandwell, a Labour peer and former solicitor general, was initiated in the UK in February 2007.9 It sought to unravel the facts and help those afflicted and bereaved come to terms with the tragedy.17

Nonetheless, this was privately funded and held no official status as well as being unable to subpoena witnesses, unlike a statutory inquiry. Successive governments argued that everything possible was done to minimise the risk of infection.23

Accordingly, nobody acted wrongly given the evolving understanding of HCV and HIV at the time, and the balance of risks of treatment versus the possible severe complications of untreated haemophilia.23 A public inquiry was not justified because they did not believe that any new light will be shed on this issue as a result.17

In 2009, the Scottish Executive set up a public inquiry under the Inquiries Act 2005, known as the Penrose Inquiry, to investigate similar issues specifically within the Scottish NHS.

After 200 witness statements and more than 13,000 pages of transcript, the inquiry concluded that actions in Scotland held up to international comparison. All that could reasonably be done was done in the areas of donor selection, heat treatment of blood products, and screening of donated blood, it found. Moreover, other than by stopping therapy with concentrates, the infection with HIV of people with haemophilia from 1980 to 1984 could not have been prevented.24

In 2015, members of the infected community in Scotland could be heard crying out “whitewash” at the end of the news conference publicising the findings.

Whilst the report was not without public criticism, it did find several points raised by the patient community as well made, for example that ‘available Scottish factor VIII concentrate should not have been given to virgin or minimally treated patients over this period unless it was unavoidable.’25

Since Penrose, the Scottish Government have introduced a new funding scheme to significantly increase the level of financial support for Scottish beneficiaries, purportedly making it second only to Ireland in terms of the levels of payment provided.26

This followed formal apologies from the First Minister, Nicola Sturgeon MSP, on behalf of the Scottish Government, as well as from the Scottish National Blood Service to the individuals and families impacted by contaminated blood in Scotland.

Announcement of a UK-wide public inquiry

Patient groups, campaigners and activists alike have contested the UK government’s claims, campaigning legally, politically and in the media for near on three decades for both adequate financial compensation and a public inquiry.

Notably, on the same day the report of the Penrose Inquiry was published, former UK Prime Minister David Cameron apologised on behalf of the British government “for something that should not have happened.”24

Over two years later, in July 2017, current UK Prime Minister Theresa May would go further by officially announcing a UK-wide public inquiry into contaminated blood, to establish the causes of the “appalling injustice” that took place.

In September 2018, the official opening of the Infected Blood Inquiry was marked by an emotional commemoration and three days of preliminary hearings. This included opening statements from Sir Brian Langstaff and the 1,288 core participants – believed to be the largest number of any public inquiry in the UK – through their legal representatives and directly from those unrepresented.

Sir Brian promised “to put people at the heart of this inquiry.”

Thank you to Brian O’Mahony for his personal contribution to this editorial.

For more information and updates about the Infected Blood Inquiry and to register to attend the public hearings, please visit the official website here. You can also follow the inquiry team on Twitter @bloodinquiry.

On The Pulse is not affiliated, associated, authorised, endorsed by, or in any way officially connected with the Infected Blood Inquiry, or any of the parties involved.

Whilst every effort has been made to ensure the accuracy of the information supplied herein, On The Pulse cannot be held responsible for any errors or omissions. Unless otherwise indicated, the opinions, beliefs and viewpoints expressed herein are those of the various authors and/or contributors and do not necessarily represent the views of On The Pulse.